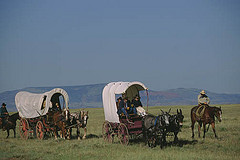 Cooperation comes naturally in the West. (Photo credit: Show Us Your Togwotee)

Silicon Valley is noted for its remarkable innovation, and is often copied by other global cities and regions in attempts to follow in its success. The fact that most other places have failed to ignite significant growth or innovation despite major initiatives, grants, and infrastructure building has shown policy makers that there is more to growing the next Silicon Valley than simple investment. It may be no major surprise that culture is one of the major keys: Besides the raw ingredients of talent, technology, and capital, there are a number of behavioral factors that turn out to be critical to a region creating major innovation. One of these factors is the idea that helping others, even potential competitors, is a good (and even natural) thing to do. In Silicon Valley, this is often called “Paying It Forward”, and it is a major reason for  the success of many startups.

In The Early Days:

Fairchild Semiconductor, a pioneer in electronics manufacturing in the 1960s, is widely regarded as the first major Silicon Valley success story. Jon Schroeder was one of the original employees at Fairchild, and relates a very peculiar story of how things worked in Silicon Valley back then:

“We would often be in the lab working and get a call from one of our competitors across town- they would have some kind of problem, and they would ask for help. We would drop what we were doing, load up our equipment in our cars, and drive to their lab and lend a hand.  We would work all night if we had to, and fix the problem. We would figure it out and then everybody would head to The Wagon Wheel to get breakfast together. The next day we were all back at work at our respective companies. That was the way it worked back then, we were all in it together.”

“Paying it forward” is an implicit feature of the culture.

Another such story, related to me by Steve Blank in a recent interview, recounts a desperate situation for another pioneering Silicon Valley electronics manufacturer: Its recipe for doping (preparing) silicon wafers had stopped working. Every batch they made had failed, for weeks – and the company was getting desperate.  When they asked for help from competitors, one gave a knowing smile and a reply that would save the day – “I bet one of your employees is using hair spray!” Though the employees were all wearing hair nets, hair spray was indeed the cause of the problem. The chemicals from one of the employee’s hair spray were volatilizing and settling on the silicon, changing the recipe and ruining their batches. Nothing like a “tip from a competitor” to save the day. This type of problem is the reason why such work came to be done in “clean rooms” by engineers wearing full body suits to prevent contamination of their production lines.

In the Very Early Days:

So where does this pattern of help come from? My favorite observation comes from Victor Hwang of T2 Venture Capital:

What we see in Silicon Valley is a legacy of the expansion of the American frontier, which required the creation of spontaneous, high-trust communities among diverse strangers.”

Looking back to California’s early days of settlement, most people had arrived after months (or years) of travel by wagon train. These settlers were the epitome of a rugged, self-selected group of independent people who were willing to take risks. On the way west, a single family could travel by themselves as as far as the Cumberland Gap in Missouri, but any further required them to join in the safety of a group- a wagon train. In order to form groups, families would stop along the trail and wait for others they could join up with.  On the strength of single conversations with complete strangers, families would create new relationships upon which their lives would depend. Wagon trains of 20 to 30 families would come together in a period of days and set out across the vast plains, deserts, and mountains to the West coast. Those relationships were created out of mutual necessity and were the difference between life and death. Literally. Being able to count on your neighbor was required because everybody knew that they could not do it alone. This population of people, a mere 4 or 5 generations in the past, is the most likely source of the “quick to trust” sensibility of the West Coast in general, and Silicon Valley in particular.

Who could have guessed that this pattern from 100 years previous would continue to help Californians to beat the odds and succeed through cooperation, where individually they may fail?

Nearly four decades ago, a long haired Steve Jobs was able to get advice from Bob Noyce, the CEO of Intel Corporation. The scene of the bohemian (and disheveled) Jobs and the distinguished Intel CEO meeting at a coffee shop may seem to be very unlikely indeed.  This pair was quite a combination – a combination that came together not because Steve was a major business figure (because he wasn’t). They came together for a much simpler reason: Steve had simply looked up Bob Noyce in the phonebook and asked him to join him for a coffee.

The answer then, as is often the case in Silicon Valley today, was: “Sure, let’s do it.”