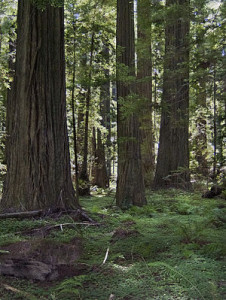 Even these big guys were seeds at one point in time. (Photo credit: Wikipedia)

A good friend of mine has long argued that startups can succeed through vision and hard work. Because I only partially agree with his position, we have had more than one heated argument on the subject. It is my belief that hard work and a great idea are required ingredients for success, but that those two elements alone are not enough for a startup to become a success.

Imagine a great Amazonian rainforest. As your mind floats along the banks of a surging river in this rainforest, pause for a moment and take in the strength and beauty of the mightiest of the trees that you can see in front of you. Reaching above all of the other plants and collecting a shower of precious sunlight, this tree is over 100 feet tall, with sinewy roots reaching deep into the rich forest soil. Beautiful isn’t it?

Did this tree get to be the the giant that it is because of hard work? Not hardly.

Rolling the clock back 120 years or so , back when that tree was nothing but a seed, it was identical to millions of other seeds that were formed during that season of that year. The seed that would become this tree grew on the branch of its parent tree and fell to the ground as an anonymous speck. While most of the other seeds of that season fell to the forest floor and were eaten by insects or washed away, that one seed fell into just the right place at just the right time. Luckily, a tree had recently fallen and left a wide reach of canopy open to the sky. In addition to that fortunate fact, the spot where the seed fell was just the right kind of niche to prevent it from being washed into the deep reaches of the river below and out to sea in the massive rains to come. That seed didn’t work hard–it was lucky.

Startups can be similar pawns of luck.

Three Ring (www.ThreeRing.com) is an education-focused startup based in New York. It was a recent participant in the New York Tech Day 2012 event, where I had the chance to meet the founders and discuss their business. Founded by Michael Lindsay, Alec Turnbull, and Steve Silvius, Three Ring aims to enhance the ways in which educators, students, and parents utilize technology in support of the learning process. Their aim is to make it easy for educators to bring artifacts into the digital world and then use them in convenient and powerful ways. While Three Ring is a growing business, the founders recognize the difficulties they have overcome to get where they are today, as well as the hurdles yet waiting to be overcome. Lindsay relates:

Paul Graham said in his trip to NYC (and my first “startup” event) that a startup needs extraordinary luck to survive. Couldn’t be more true. Every single good thing and blessing we’ve seen has been a product of profound luck.

Just like that seed, a startup has to be viable for it to survive. Viability means that given the right combination of resources that the business fundamentals are good enough to become something–good enough to take hold and grow. For a startup, that means having a good idea, a niche in the market, and a team willing to do the work. The luck portion comes in when the other resources that the founders don’t already have become critical to the startup’s next step and then magically appear. Those key resources might be money, skilled employees, a partner company, publicity, and the like.

Can a startup like Three Ring work its way to success? At least partly. Working hard and doing the right things creates its own kind of luck. As Samuel Goldwyn famously said, “The harder I work, the luckier I get.” I have found that to be true of startups–to a point. As for Three Ring, Lindsay continues by noting that “all of that luck was made possible by being active, putting myself/ourselves out there, and engaging with people.”