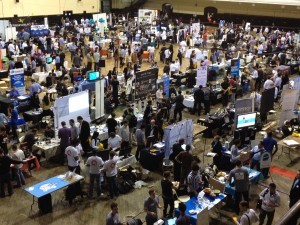 NYC has long viewed itself as being the best city in the world on many fronts- culture, advertising, finance, food, fashion. So it has not been without some envy that the city has looked west across our American continent and watched the major global impact that Silicon Valley has had in its nearly 50 year run as the undisputed global leader in technology, web and the growing trend of startup culture. That sense of comparison and rivalry was clearly evident at NY Tech Day, and it was with great pride that these New Yorkers took in the many startup companies that displayed and pitched their offerings.

And that pride is not without reason:

As pointed out in the keynote address following the event, major web players Tumblr, Foursquare, and Meetup are all homegrown New York startups. In addition, New York has been shown in a recent study to be the #2 city for VC tech investment behind Silicon Valley. In what is probably a reach for the substantial technical talent present in the area, Google, Twitter, Facebook are establishing ever larger offices here in the city. These facts, along with the almost incomprehensible diversity and raw energy of New York, are making The City a powerful player in tech.

That being said, the comparisons to Silicon Valley will remain for years to come.  While New York will always offer more diversity, Silicon Valley will long remain a better growth medium for those startups needing to benefit from pure serendipity – the chance coming together of the right tech ideas, the right tech talents, the right tech connections and the right tech money as it occurs as a part of everyday life. My conversations with startups in California almost always emphasize the fact that you are constantly meeting tech and investor people in everyday life in Silicon Valley. An example I remember is a friend meeting a VP of Cisco at a daughter’s soccer game, and setting up a deal as a result. I myself have made tech deals literally on the street in San Francisco, and believe that happenstance relationships often end up being the “difference that makes the difference” in startups.

For Tech Day, it was a clear success. The quality and ingenuity of the best of the participants today are on par with those anywhere in the world. With events like this bringing them attention and networking, we should expect to see some of today’s crop of hopefuls in the headlines or on our own computer screens in the coming years.

Comparisons aside, expect more in the coming years from New York. It truly is becoming the Silicon City.