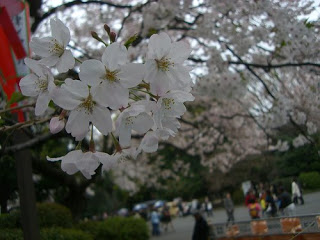 Japan is funny sometimes. We watch Japanese TV at home (more than American shows) and I noticed that a number of TV personalities all disappeared at the same time. The NHK news announcer lady, the performers on the kids TV show “okaa-san to ishyo”, and others. In addition, a number of engineers we know in Japan have been shuffled around to different jobs and departments.

It wasn’t an earthquake. It was the HR dept. version of Spring cleaning.

In Japan, the end of March, and beginning of April mark a very symbolic and important period of renewal. My wife Kazuko says that people want to feel something fresh is in place, and see something new. Right at the time when the cherry blossoms are blooming, people can enjoy the feeling of the ax falling down.

It really isn’t that bad, since Japanese corporate culture still seeks to retain its people. It just seems to be an acceptable opportunity to reshuffle. The folks who disappeared from the TV shows are probably still employed by the network (the hosts on the kids show did a lot of highly technical tasks such as “dancing with bears” and “singing about fruit”, so they are surely doing the same thing somewhere else now, right?)

I did notice, however, that the Big Names on TV are immune to flower season. They continue to narrate, bear dance, fruit sing or whatever season-to-season. A show called “Eigo de shabera-nai-to” has a host named Patrick Harlan (AKA “pakkun”) that has demonstrated this kind of resilience. This is probably due to his good face/name recognition, his regular English lessons in “Aera” magazine, and the fact that he is one of only 3 or 4 foreigners on Japanese TV who can speak Japanese well enough to not be subtitled on every word and syllable. Another resilient guy is the eternally stone-faced male newsanchor at NHK. His lady partner got booted, but he is still there to tell the tale another day. Good for him.

My Other Posts
I am fortunate to have started my first company when I was 24 years old and have built companies in several industries (and had 4 transactions) since then.
Tags:Business, Japan, Work Culture